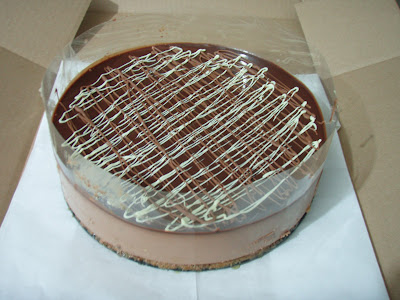 I love cheesecake! Almost any kind of cheesecake (I go crazy at the Cheesecake Factory- forget the meals, just give me cheesecake). I've made many different kinds and recipes of cheesecakes ( I have a cookbook that is JUST cheesecake recipes!) There are unlimited versions and preferences when it comes to cheesecake. With crust, without, with topping, without, cream cheese, mascarpone, with sour cream , without sour cream and so on and so forth.
If I had to pick a favorite, it would probably be the trusted New York cheesecake, but even with that, there are varying recipes and approaches. In my travels through cheesecake making, I find that the amount of butter used to make a graham cracker or cookie crust is always too much. It comes out so "butter" heavy and seeps out the sides of the spring form pan. Through the years I've cut down drastically on the amount of butter a recipe calls for in the crust. You really just need enough to hold the crumbs together- and that will do the trick.
I like this cheesecake because it's easy, quick and not overly, sickeningly sweet- it's even got a touch of sourness ( is that a word?) to it. I've changed the original recipe and used my new discovery (I know, I'm probably way behind and this stuff has been around for ages , but I just found it.) Those little individually packaged caramel cookies you get on the plane? They are amazing and I always want more than the one or two they give you. I finally found them here in Israel (I even found a spread like peanut butter or Nutella , from the same company that makes the cookies- oh what joy!!!!)and decided to use them for the cheesecake crust. WOW!! That's all I can say- what a great flavor it adds to the cake.
This recipe is from Carine Goren's new book- Sweet Secrets 2 . I've adapted it slightly , but the basic recipe is the same. Definitely worth a try!
Recipe coming soon!

Email ThisBlogThis!Share to TwitterShare to FacebookShare to Pinterest
Labels: cakes