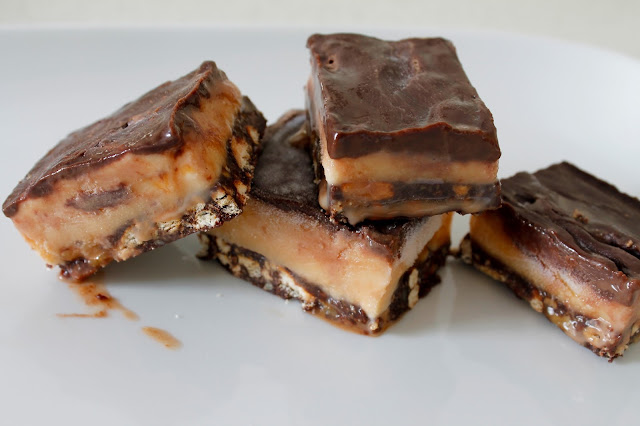 I've seen and heard of these bars many times in the past but never tried them. I wasn't even sure how to correctly pronounce it.  So here you go:

Now that we've got the pronunciation down, the next question is- where does that name come from and exactly what are they? Straight from Wikipedia!
"Nanaimo, a city on Vancouver Island in British Columbia,Canada. It is known as "The Harbour City." The City was previously known as the "Hub City" which has been attributed to its original layout design where the streets radiated out from the shoreline like the spokes of a wagon wheel as well as its generally centralized location on Vancouver Island. It has also been known as the "Bathtub Racing Capital of the World." Hmmm, interesting little fact tidbit! ( I have secretly always wanted to know where the "Bathtub Racing Capital of the World" was!)

Nanaimo is apparently the place these bars originated and there are varying views as to who actually wrote the recipe. Different versions have emerged through the years. This one, from Baked Occasions, has a  crust from digestive biscuits ( a semi-sweet biscuit originating in the UK), crushed salty pretzels and walnuts. I love the addition of the salty pretzels, as they give just the right amount of balance to this very sweet dessert.

The recipe calls for vanilla or salted caramel ice cream for the middle layer- homemade or store bought. Obviously , store -bought will make the entire process faster and easier, but I can never refuse an opportunity to make my own ice cream. I used David Lebovitz's recipe for Salted Butter Caramel Ice Cream.  OMG!! to die for! I actually cut down the amount of sugar it calls for , since the whole recipe for the Nanaimo Bars is so sweet. It came out delicious and perfect for the bars, but really any quality store-bought ice cream would be fine, if you're not into that extra step.