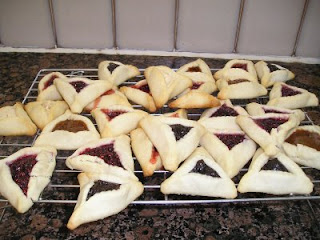 Tomorrow is the Jewish holiday of Purim. "Pur" in Hebrew, means "lots" or "lottery". The holiday celebrates the bravery of Queen Esther and how she saved the Jewish people from the evil Haman (an advisor to the king) in Persia in the city of Shushan. He decided to do away with the Jews and drew "lots" to decide which day would be their doomsday. Queen Esther found out about his plan and basically ratted on him to the king(who up until that time didn't even know she was Jewish). Long, complicated story, but in short, she saved the day. The date that was originally chosen for the Jews to be destrpyed , now became a day of celebration. It is a joyful, fun holiday , especially for children, who dress in costumes and parade around the city . The story of Queen Esther is read in synagogues throughout the world. It is a tradition that every time the name of Haman is mentioned, children and adults alike, shake noisemakers in the air, yell and shout, so as to drown out his evil name.

What is left of the evil Haman today is actually something very sweet and yummy. In Yiddish they are called "hamentashen" and in Hebrew , "ozney Haman" ( which is sort of strange since the translation for that is Haman's ears(!)and the three cornered cookies resemble his hat!)

So today, I made ozney haman with my 3rd, 4th and 5th graders. I made the dough at home and brought it to school since the class wasn't long enough to make and chill the dough.

I brought in rolling pins and round cookie cutters and had stations around the room so that everyone would be occupied while the others were making their cookies. Fillings were varied and ranged from strawberry and raspberry jam, to halva or date filling. The kids had a great time and the dough was delicious. I got the recipe from Carine Goren, an Israeli pastry chef, and it really is a winner. Below is the recipe I printed out for my students to take home and try with their families. I hope you enjoy them as much as we did today in class! Happy Purim- Hag Purim Sameach!

How to make them:

1. In a food processor, mix all ingredients except milk until it becomes crumb-like.
2. Slowly add a bit of milk and mix until the dough forms a ball. If the mixture seems dry, add a bit more milk but be careful not to add too much. You don’t want wet dough.
3. Wrap the dough in plastic wrap and refrigerate for 1-2 hours.
4. Roll out the dough between two sheets of parchment paper and cut circles with a glass or cookie cutter.
5. Place a teaspoon of filling in the middle and pinch closed to form a triangle.
6. Place on parchment paper lined baking sheet and bake at 180 C. (350 F) for 12-15 minutes. The edges should be a golden color but the cookies should not turn brown.
7. Cool and ENJOY!