It's been a very long time since I 've posted anything. Reasons range from laziness (I am a notorious procrastinator) to more valid  excuses like visiting family in the U.S.( I know, that 's not really an excuse- they have a computer too!) , and having to find a new apartment to rent, which is almost an impossible task in this country. It has been a very stressful time for me, and we still haven't found anything, but at least our present landlord has given us a reprieve until August. Phew! Now I can get back to my normal ( well ,sort of) life.

Baking has been sporadic; cooking even less. While in the States I bought a few cookbooks I've been wanting- Baked by Matt Lewis and Renato Poliafito and The Perfect Scoop by David Lebovitz. Could have bought tons more, but that weight restriction on overseas flights will kill ya! I made the Root Beer Bundt Cake from "Baked" and it was delicious. Easy to make and the root beer flavor was not as strong as I had expected. I also made  "The Baked Brownie", which is one of their signature items. Fudgy, moist and really just all around yummy ( amazing with a scoop of vanilla ice cream on the side!) .

I'll be posting more as I make my way through the book.

As far as pictures go, my little point and shoot camera is on it's last clicks- looking around for something to replace it without spending a fortune- any suggestions would be welcome!

I did bake some heart-shaped sugar cookies for Valentine's Day and they are waiting patiently to be decorated.

I also managed to  make some cupcakes for a friend's birthday. Got the decorating idea from Martha Stewart. It was fun to do and everyone loved the flavor- vanilla cupcakes with a lime buttercream frosting and cut out fondant letters on top. 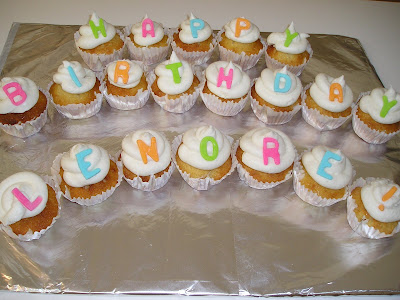